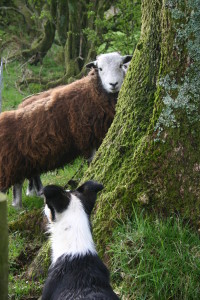 Herdwick sheep are widely considered to be the most hardy of all Britain’s breeds of hill sheep. Probably 99 per cent of Herdwick sheep are kept in commercial flocks in the central and western dales of the Lake District. These fells run to over three thousand feet and facing the westerly rain bearing winds they record the country’s highest rainfall.

Herdwicks have a well-justified reputation for foraging ability even in the most difficult terrain. Many of them live their lives without receiving any supplementary feed. Typically they are drafted from the hill after three or four lambings when they often prove capable of producing several further crops of lambs.

Although under fell conditions they usually have a lambing percentage of less than 100 per cent this is largely a feature of the nutritional state they live in on the fells. When they are drafted to the lowlands their productivity increases markedly and they perform at least as well as other hill breeds.

Breeders have concentrated on retaining the Herdwick as an active and strong boned sheep of good conformation. We believe that it is this which enables the Herdwick draft ewe to produce such a good cross-bred lamb. Texels, Suffolks and increasingly Charollais tups are used as crossing tups with Herdwicks. Cheviot cross Herdwick lambs also represent a good crop. All these crosses are widely sold store at the back-end of the year to lowland farmers looking for a long keep lamb which will reach between 35-40 kg liveweight at the time when the fat market is at its strongest. In recent years much success has also been had with crossbred lambs out of Herdwick ewes on the lightweight lamb trade.

Given the breed’s admittedly low quality and low value wool it is not surprising that there has been a tendency to breed for a tight and short fleece, although some breeders still prefer a longer and lighter coloured wool. There seems to be no significant difference between the performance of either type. One fact about the Herdwick fleece based on practical experience on many farms is that Herdwicks do dry out quicker than white woolled breeds after rain.